The Stomvi 4 valve F Cornet is the first cornet in the world built in that key. 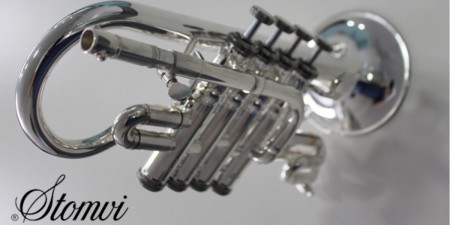 Historically, the F Key has mostly been used with the Baroque trumpet, but over time and with the incorporation of rotary and piston systems, they have gradually been displaced by the new timbres and sound dimensions of the modern Bb and C trumpets, especially the modern piccolo trumpet, which has greatly facilitated the high range. The F and G trumpets have also been used more frequently for modern transcripts of Baroque repertoire (which were not originally written for the trumpet).

With this F four-valve cornet we have a range of 3 octaves (F3 to F6), which facilitates a broader dimension of sound, and this warmer colour gives much more nobility to timbre and character. Comfort, balance and intonation are simply fantastic.


This instrumentis made for you, the player, to adapt your needs as an artist, as well as for the new projects that you yearn to develop.  As always, Don Vicente Honorato and the STOMVI family have opened up a new musical window!