Stomvi has developed the BR concept and has applied it to the French horn mouthpieces.

The result is less stress as well as an increased sound quality. A different and revolutionary concept.

The BR (Brandenburg) mouthpieces are the result of an exhaustive study regarding the resistance of the air passage, its incidence in the different registers and the sound projection. The double-cup system gives us a substantial improvement in the direction and projection of the vibrations through the instrument in a hitherto unknown way. But above all, it gives us a great adaptability to any record, influencing the first cup the high register and the second one, deepest, the lower key.

The result is less effort in the different registers, but never to the detriment of the sound quality.

But if you dare with something even more revolutionary, the BRCD mouthpiece is yours...

We add to the BR system the CD system (detachment layer), based on aeronautical science and the study of air friction on materials. Thanks to the concentric rings located inside the cup, we were able to reduce the friction resistance to the air and therefore an improvement in its passage through the narrower element of our instrument, the mouthpiece.

You can choose between 3 different types of cups named x, y, z, being X the one with the largest air capacity and Z the lowest capacity one. The usual cup produced is Y one, whereas that Z and X are produced upon request. 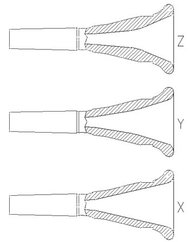 The ring of the mouthpieces was developed to satisfy the greatest number of users, being comfortable and allowing an incredible flexibility. 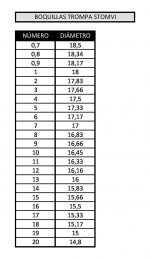 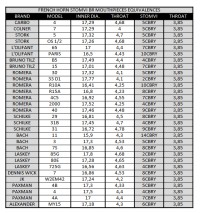